Maiko Tanaka takes up her curatorial practice as a public, political, and collective form of research that can enable the production of new subjectivities and aesthetic forms. Since 2010, she collaborated with Binna Choi on CasCo’s “The Grand Domestic Revolution – User’s Manual” a long-term “living research” project based in Utrecht, through which she became involved in several collective practices, including a nomadic reading group, an alliance between cultural workers and domestic workers, and a cooperative sitcom about the Dutch squatting movement. From 2008–2010, Tanaka partook in a curatorial residency at the Justina M. Barnicke Gallery, University of Toronto, where she organized the international conference exhibition “extra-curricular: between art and pedagogy,” presenting alternative structures for mobilizing radical pedagogical art practices. She currently lives in Torontoand works as a board member for the Toronto-based art organization Gendai. 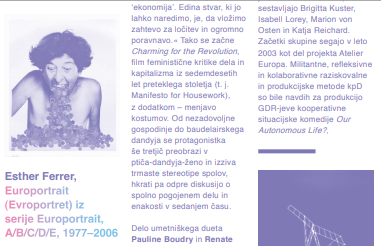